Let’s talk a little bit about medical education, we’ll head back over to the white board.

I told you about the paradigm, and I told you about how we’re taught that cycles run a certain way. And basically when you eat these foods, these are the killer carbs: wheat, breads and bagels, pasta, anything made of flour, cakes and muffins, sugars (sugars include high fructose corn syrup, maple syrup, agave nectar, any kind of sugars), corn, potato, rice/cereals, and other starchy foods. When you eat any of these things, what happens is it goes into your body and your body converts these carbohydrates into glucose. Glucose is sugar – that’s blood sugar, circulating in your blood. 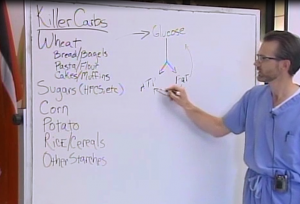 What we’re taught in school is that glucose is metabolized by the body, goes down, and produces two things. One is ATP – this is what your body uses to power itself. And the other thing it can produce is fat. So it stores the glucose as fat, or the body burns the glucose as energy. This is taught as normal human metabolism. However, there is also a way – and this is the reverse – that the fat could be turned into glucose or into ATP.

You can see, as soon as we draw this, it’s a paradigm. It’s a paradigm, it’s a model, it’s a template that says burning glucose is normal. It says eating these refined carbohydrates, turning all that into glucose and turning it into energy and fat is normal. Because if it was not normal, this thing would be upside down. And that’s what I’m trying to say here is that it’s not normal.

Normal human metabolism should start with fat. And this fat should come from your body or from the fats that  you eat. And you take that fat, and you burn that fat and you make ATP – that’s energy for your body, that’s energy for you to move – and you can also use some of it to make glucose, or you can make ketones. And then you can say, “Well, this also runs backwards, the glucose can also be used to make the fat.”

And this is the way that it should be taught. The reason it’s taught with sugar on top is because the people who discovered sugar and discovered these metabolic pathways were essentially Western physicians, Western scientists who started from the preconception that eating lots and lots of wheat and eating lots and lots of sugar and potatoes is normal. But it’s not. We’ll talk about why it’s not normal.

How to Lose Weight with the Paleo Diet 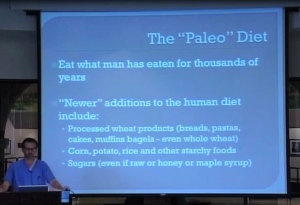 You may have heard of this thing, it’s called the “Paleo” diet. The Paleo diet is just the latest iteration of low carbohydrate diets that have been popular and have been known to work for two hundred years. 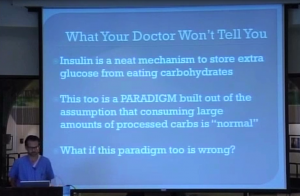 Insulin – this is another thing that we’re taught in medical school. Some of you might know about insulin because you’re diabetic, or you may know of people who are diabetic, they take insulin.

Basically in medical school we’re taught that you eat these killer carbs, and that makes glucose. Glucose gets into your bloodstream. If the glucose gets too high, you go into a coma. That’s what happens to diabetics who eat high-carb meals but they don’t know they’re diabetics yet, and they end up in the medical intensive care unit – maybe this has happened to some of your family members. If the sugar gets too high, then they end up very sick and they end up in a coma.

So your body, to protect yourself from that happening, makes a hormone called insulin. What that hormone does, that hormone says, “Man, we gotta clear all the glucose out of the body. We gotta store fat.” And so the glucose that’s coming down to power your body gets stopped by the insulin. And the insulin essentially puts the glucose, which is the sugar, puts it into your fat cells and helps the liver to make more fat to circulate into your body that goes into your fat cells, and it also tells your muscles to burn insulin.