This is kind of funny.

So I’m sitting at the office and one of the nice ladies at the office who works with me, she brought me a slice of red velvet cake. And the thought that went through my mind was, Do I want to poison myself today?

How to Lose Weight: Insights from Evolution 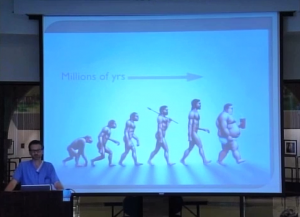 I don’t know if you believe in evolution or not, and I’m not trying to get anybody to believe in evolution. But the way that I’ve always thought about it was that God created man. And how God created man, well, God started off with the animals, the monkeys, and all sorts of stuff, and then man came at the end. And so for me, personally, I’ve never had any problem with the concept of evolution and the concept of creation. They always made sense to me and went together. But basically, this idea, the way evolution is taught is that this took millions of years, millions and millions of years, to get to this point. And right the end, we blew up.

The Death of the Low Carb Diet

And there have also been changes to the way that wheat was grown. In the 1960s, wheat was hybridized and modified so that it grew shorter, it grew faster, and it would feed more people. And modern wheat does feed more people. Modern wheat has proteins in it that ancient wheats didn’t. And we don’t exactly know what they do, but we do know that wheat spikes your blood sugar.

There are a lot of people that are called modern “hunger-gatherer societies.” And those are peoples or tribes that survived into the 20th century. And we can study what they ate, and then we can see after they get on a Western diet what happens to them.

On the top picture, that’s a child, he’s a Crow Indian. And on the bottom, that’s another Crow Indian and he’s receiving a medal from a congressman. So if you take the modern hunter-gatherer, somebody who is a tribe, that eats lots of meat, no refined carbs, and you put them on refined carbs, they get all the diseases that you have, that I have, that our family members have, including being overweight, hypertensive, diabetic.

This picture’s just for fun. That’s President Obama trying to put a medal of recognition on this, he can’t get around the headdress. 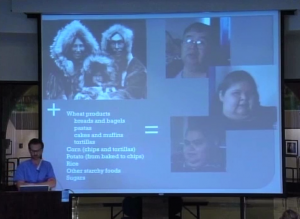 This is another group of people that survived into the 20th century as an isolated group not eating Western foods. These are the Inuit, commonly known as Eskimos.

These photographs are taken from a video that’s listed in your handout, it’s called My Big Fat Diet Canada. And I suggest you all watch it, My Big Fat Diet Canada, and it’s listed in there, it has a URL. But this is a father and his two daughters. The two daughters are morbidly obese and the father, he’s heavy, too. And he has diabetes, high blood pressure, he’s on heart pills. And so another modern society, take them off their meat-based diet, then you put them on a carbohydrate diet and this is what happens.

Now the thing that’s inspiring about this, is that in the movie My Big Fat Diet Canada, in that documentary, this father, everybody in the whole town, they go on a low-carb diet — that’s what the documentary is about. And so this father, he says that within four days he’s off 75% of his medications. And he’s off 100% of his medications in two months. And that’s one of the things that is inspiring, or was inspiring to me, and one of the things that I really wanna share with you is that you have a choice.

Let’s go over to the board.

Healthy Weight Loss is a Choice 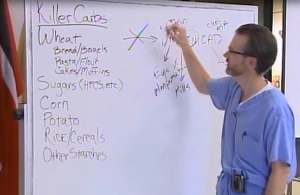 You have a choice about your health and a choice in life, which is you can consume these things, and when you consume these things you end up with diabetes, high blood pressure and heart disease — you end up with these diseases. And after that, then you get the pills. And sometimes for diabetes you get one pill, then two pills then three pills, then they put you on insulin, right?

High blood pressure. Did you know there’s over two hundred high blood pressure medicines listed, on the WebMD website? And heart disease, they put you on cholesterol medications and aspirin, etc.