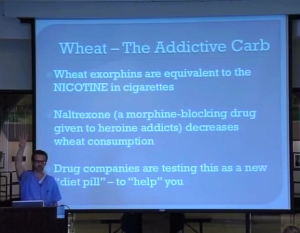 In fact, there are some drug companies that are trying to develop naltrexone into a new miracle diet pill. But the problem is, when you give people naltrexone, chronically, they get depressed. Because the naltrexone blocks the morphine-like exorphins from the wheat in your brain but it also blocks your normal, natural endorphins. And endorphins are what your body releases when you feel good about something or when you have pleasure. When you exercise, you release endorphins.

If you have twenty problems, your doctor will put you on 20 pills.

I’m an ophthalmologist and I do cataract surgery, so my patients are in the age of 65-85. And I can’t tell you how many patients have walked through the door, and they have a list of medications that’s 15 medications long. Fifteen prescription medications they take each and every day of their life. And that’s what I want to save you from. If you can get rid of just one medication, that would thrill me.

Duty of a Physician

Sir William Osler, the Father of Modern Medicine, he said, “One of the first duties of the physician is to educate the masses not to take medicine.” That’s what we’re here for. 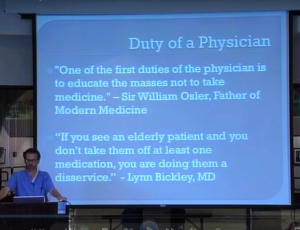 I went to medical school here and did my internship here. And when i was an intern my professor, Lynn Bickley, who is no longer at the medical school, but she said, “If you see an elderly patient, and you don’t take them off at least one medication, you’re doing them a great disservice.”

So why do we eat so much of these refined carbohydrates? We already talked about their being addictive. Number two, they taste good. And that’s an interesting point. I can’t deny that sugar tastes good and bread tastes good and cakes and cookies and pies all taste good.

So the excuse that you run in your mind that, “Well, it tastes good. I like to eat things that taste good.” No, you don’t. Because if cyanide tasted good, you wouldn’t eat it. You would recognize it’s a poison.

How to Lose Weight: Debunking the Myth of Whole Wheat 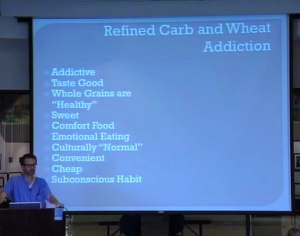 Another thing is that we’ve been told whole grains are healthy. Basically, they did studies on hunter-gatherers, and they said, “Well, look, they don’t get any of these diseases. Why don’t they get the diseases? Well that’s because they have more fiber in their diet.” And so they said, “Well, you Americans need to eat more fiber so we don’t get these diseases like diabetes and obesity and colon cancer.” But the problem is, these people they studied, these hunter-gatherers they studied, they didn’t get their fiber from wheat; they didn’t get their fiber from cereal grains. They get their fiber from vegetables, fruits, and nuts.

So the American Dietetic Science community said, “You need to eat more fiber.” What’s the easiest way to eat more fiber? You take white flour and you turn it into whole wheat flour. Now you got more fiber. But the people we actually studied were people who ate fruits, vegetables and nuts. That’s where they got their fiber.

They’re sweet, they’re comfort food, there’s emotional eating. It’s normal – normal to have a hamburger between two buns, right? So for you or for me to get to the point that I no longer have a hamburger between two buns takes a little bit of a change. They’re convenient, they’re cheap, and they’re a subconscious habit. We’ll talk about the subconscious mind a little bit later.

So if they’re harmful, why do we eat so many? The number one reason was that they’re addictive; number two, they taste good. Number three, they’re cheap. Breads, cookies and cakes, things like that, they’re some of the cheapest foods that you can buy. Breakfast cereals, you go down the breakfast cereal aisle, it’s a big box like this and it’s only $4.