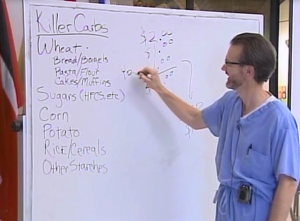 This is an interesting story, and if it’s interesting we should tell it at the white board. In the 1960s the Federal Reserve Bank, which is like the Bank of the United States, essentially they printed too much money and when they print too much money there’s this thing called inflation. And inflation is where all the prices of everything goes up. So the price of gas went up, the price of real estate went up, the price of food went up. And so the government said, “Look we gotta do something about this because everybody has to buy food.” The richest of the rich, the poorest of the poor – everybody – has to buy food. And people were really angry about the food inflation, about how expensive things got.

And so what they used to do, starting in the Depression (or just after the Depression) is they used to loan farmers money if the price of what they were selling got below the cost of production. So basically, let’s say the cost to grow a bushel of wheat, the cost of production – this is what it cost the farmer to grow – it cost $2 and the wheat was only selling for a dollar a bushel. So what the government would do is the government would make them a loan of a dollar so they could have their $2 and keep the wheat off the market until the price went back up. And when the price went up above $2 a bushel, then the farmer could sell it. So it kind of propped the price up, that’s what the loan program did.

Who paid the extra dollar? 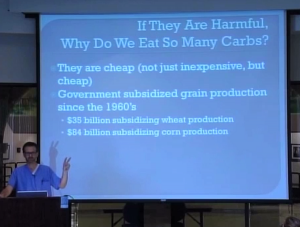 But you can imagine, if there’s food inflation and things are too expensive, the government says, “Well, we can’t prop the price up, we gotta get the price down.” So what they did instead of giving a loan – and this is outlined in a book called The Omnivore’s Dilemma, it’s not in your handout but it’s The Omnivore’s Dilemma – what they did is the government said, “Look, instead of loaning you money, we’re just going to pay you the difference and you can dump your corn and your wheat on the market. So the government paid this dollar, so now the farmer received his two dollars, covered his cost of production. And all that cheap corn and all that cheap wheat went on to the market in a giant multinational corporation that can buy that corn or that wheat for $1 a bushel, even though it cost a $2 a bushel to produce. Who paid the extra dollar? You did. You paid the extra dollar.

So anyway, the corporation buys this corn and wheat at half the price, and then they process it and package it, and they sell it to you as crunchy, heart-healthy oat clusters in a box. And they take this corn or wheat, and they put about $0.04 of raw materials into a box of crunchy, heart-healthy oat and nut clusters, and they sell it to you for $4. And they got to buy it half off to begin with.

How to Lose Weight: Resist the Cheap Carbs

We talked about this. Anything that’s a packaged food, when you see a packaged food I want you to think of it in terms of weight. I want you to look at it, like if you see a box of cereal and it says on there, 10 oz, or let’s say it says 1 lb. Look at the first ingredient. The first ingredient is either going to be wheat or it’s going to be sugar, or it’s going to be corn, or it could be rice. Wheat, sugar, corn, rice – any of those things, you can buy for $1 a pound, or less, retail.

So if you look at that box of cereal and it says that it contains a pound, net weight, total weight is a pound, and they sell it to you for $4. You know that you yourself could buy those raw ingredients for $1. And that’s where they make their profits. 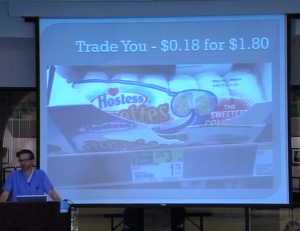 So I was in the drug store the other day. And I saw these powdered donuts. And the point of this is, this package of powdered donuts contained 3 oz of product. And the main two ingredients, the first two ingredients were wheat and sugar – both of which you can buy for less than a dollar per pound. So that means you could make these donuts yourself at home for $0.18, but you pay for them $1.80 at the store. That’s what packaged foods are.