It’s like when I was in medical school, they showed us a study. You can create a study such that the study can prove anything. They showed us a study that showed that polio was highly associated with ice cream consumption. So the thought was, maybe ice cream causes polio. The truth is, polio is not caused by ice cream consumption; polio is an infection. But polio is spread during the summer when kids eat more ice cream. If that’s the only question that you ask, “Did you eat ice cream?” and they say yes, then you can kind of construct a study that shows anything.

But if you’ve got high blood pressure, your doctor has pills. There’s hydrochlorothiazide, Diovan, atenolol, lisinopril, and there are over 200 blood pressure medications, or you can cut the killer carbs. This is my blood pressure again, I’ll show you again: 142 systolic in 2011, 126 in 2013. 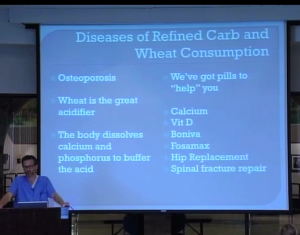 Your body doesn’t function well in an acidic pH, so what does it do? Your diet goes to your bones and it dissolves the calcium and dissolves the phosphate out of your bones to help buffer the acid to bring your pH back to normal. So all these people who have osteoporosis, it can be improved by low carb diet, getting rid of the wheat, or you can take your calcium and your vitamin D, and the once-a-month pill, Boniva, Fosamax, and if you get a fracture you end up with hip replacement or spinal fracture repair or you just cut the killer carbs.

How to Lose Weight and Relieve Arthritis 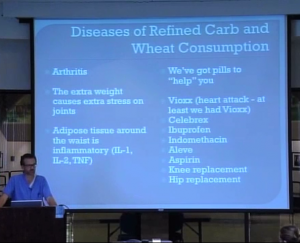 But from a medical perspective, your doctor has pills like Vioxx, which they took off the market because they gave people too many heart attacks – or we used to have Vioxx I guess. There’s Vioxx and Celebrex, ibuprofen, indomethacin and Aleve, and eventually, knee replacement for arthritis, you could have hip replacement for arthritis, or you can cut the killer carbs. 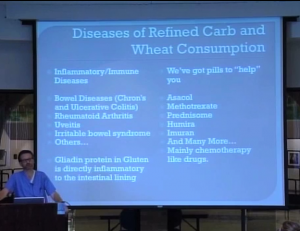 If you want to learn more about wheat, you read the book Wheat Belly, it’s listed in the handout. There’s all sorts of drugs, in fact, in the book Wheat Belly there’s a patient, she had ulcerative colitis, she was scheduled in two weeks to have her colon removed and have a bag placed where the stool drains out of a bag instead of normal. And the doctor said, “Look why don’t you just cut wheat out, at least try it for 6 weeks, just see if you get better. And if you don’t then you can still have your ostomy bag, but if you do get better then you get to keep your colon.”