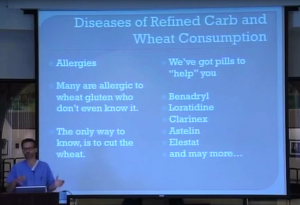 This is something that I would not have believed if I had not seen this with my own eyes. My son, who is now 4 years old, he used to sneeze and sneeze and sneeze. And you know when kids sneeze and that snot goes all the way from their nose down to the waist. You guys have seen that? All the way from the nose to the waist, and it was like that for months. My wife made him an appointment to go see the allergist because she said something has to be done, this isn’t normal.

And then before the allergist appointment came up, we read the book Wheat Belly and Wheat Belly says, “Oh, there’s a lot of people who have allergies to wheat and they don’t know it.” So we stopped eating any wheat whatsoever at our house. And the snot from the nose to the waist stopped — completely. And if my son goes to a birthday party and he eats cake or some chicken nuggets that have breading on them, he sneezes the snot from his nose to his waist for two days and then it goes away. So at my house we eat zero wheat.

And this was something that I would not believe if I hadn’t seen it for myself. Because I was taught in medical school, sinus allergies are caused by local irritation from things that you inhale. So there’s pollen in the air, dust in the air, mites in the air, you inhale them, they get into your sinuses, they cause you to sneeze; they make allergic reaction and mucus. But I now believe that people can be allergic to a lot of foods, especially wheat is number one. Dairy affects some people – number two. They can be allergic to a lot of foods that cause chronic sinusitis, and it has nothing to do with the stuff that you inhale, nothing to do with your environment. 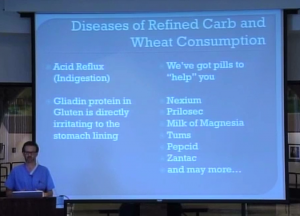 In fact I thought the tomato sauce of the pasta and pizza gave me indigestion. I was wrong. It was actually the wheat in the noodles and in the pizza crust.

How to Lose Weight by Cutting Carbs 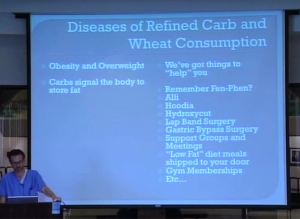 Obesity and overweight — the carbohydrates signal the body to store fat. There are all sorts of pills, and there are people who will make you a patient for life, they want you to go to meetings and support groups. Why do you need support? You shouldn’t be depressed. People get depressed when they’re on a calorie-restricted diet. You should feel great because you’re on a low-carb diet.

This lady, she’s a Pima Indian living on a reservation, some of the poorest people in the Southwest. She’s obese, they’re poor and obese. Why? That used to be kind of a paradox to me. How could you be poor and obese? They’re absolutely dirt-poor, they have nothing. And obese, is because she survives on rations that they send to the reservation and the main rations are flour, sugar and crackers – wheat, wheat, and sugar.

Why you should See your Doctor

I met a lady, she had polycythemia, she can’t eat too much iron so she doesn’t eat much meat. Should she do a low carb diet? Probably not. People with kidney disease should not do a low carb diet because their kidneys can’t handle the protein. So you have to see your doctor. There are some people that I know that have improvement in their symptoms, we already talked about.