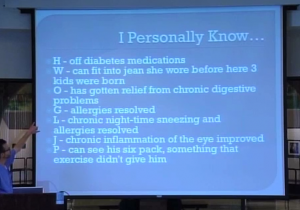 But we didn’t talk about this lady, this is a person I personally know, she can fit back into her jeans that she wore before she had three kids – having kids, you tend to get a little bit bigger.

Chronic digestive problems, that’s another friend of mine, they’ve gone away. She stopped the wheat, allergies and sneezing – gone away.

This is in another person I know, the chronic eye inflammation, he has this weird inflammatory eye condition called uveitis, his eye is inflamed and its pressure goes high periodically throughout the year. He stopped the wheat, it’s improved. He used to get flare-ups like three or four times a year maybe now he gets a flare-up once a year or two.

Oh, and there’s another guy I know, you can be on two different sides of the spectrum, you can be on the “Look, I just wanna lose some weight, I just wanna feel better, I wanna get rid of some pills,” or you can be like, “Oh, I wanna get ripped.” And so this is the guy who wants to get ripped. He’s been at the gym, he’s been exercising, he’s super healthy, and he cut the carbs so you can see a six-pack. So that’s what some people are into.

How to Lose Weight: Your Choice 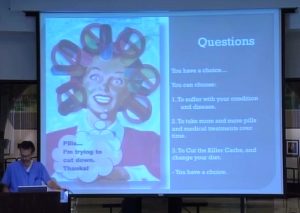 This was a graphic I found on the internet, it’s called happy pills, this lady’s taking happy pills. But the idea is, you don’t have to take all the pills your whole life. If you have diseases, you can choose to suffer with those diseases and their symptoms, you can take the pills and the medical treatments, or you can cut the killer carbs and change your diet.

Question from Audience: I’m so confused about the wheat because I always thought that it was the white, or any of the wheat that says “bleached white flour.” So I was taught that whole wheat grain is okay, and you’re saying that’s not the case.

Question from Audience: What kind of bread do you eat?

Question from Audience: What about barley flour?

Answer from Dr. Anderson: I don’t know the answer about barley flour, you’d have to look up the net carbs in it. I know this, I know that wheat flour has about 92 net carbs per cup, and almond flour has 9 – so 92 versus 9.

Yes sir, in the back.

Question from Audience: Will wheat depend on the species of the wheat like there’s modern wheat versus ancient wheat, or just wheat, all wheat altogether?

We’ll do one more question and then we’ll take a break. Yes?

Question from Audience: So you’re suggesting that we go to the doctor prior to, (Yes Ma’am.) And then how often do you suggest we go for follow-up to start dropping meds?

Answer from Dr. Anderson: That would be a question for your doctor. One of the most powerful things is on that video of Eric Westman, he said, “Look,” – Eric Westman is a doctor at Duke and he said, “If you have diabetes and you’re starting a low carb diet, on the first day, you need to cut your diabetes pills in half. So from the very first day, cut your diabetes pills in half. If you don’t, you’ll be hypoglycemic. And being hypoglycemic – having low blood sugar – is dangerous, like it will send you to the hospital. So that’s why you need to see your doctor first. And your doctor may say, “If you’re gonna do this, you need to check your blood sugar five times a day until you get to kind of a stable level, and call me and we’ll adjust your pills. So I don’t know how often to check in – I would ask him that.

Question from Audience: So you’d do the same think like with your blood pressure medications – just check it more often until you see a change?

Answer from Dr. Anderson: Yes Ma’am.
Ready to Get Started?