Reprogram Your Subconscious — Don’t Fight It! 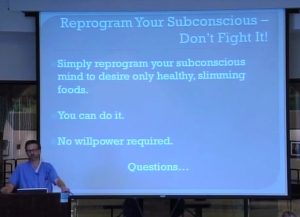 So you can see, you repeat these things all the time, you think it’s normal. So it’s time to uninstall some of those programs and make a new normal. Reprogram your subconscious, don’t fight it. Don’t try and use willpower to fight something as big as this room. Don’t try to use the tiny little conscious mind to fight your subconscious. You can do it, there’s no willpower required.

Question from Audience: How come beans are so bad?

Answer from Dr. Anderson: Two things: number one, the amount. There are 92 grams of carbs in a cup of wheat flour. And there are about 1 gram of carbs or 2 grams of carbs in a head of letuce — so it’s the amount. So you could eat a hundred heads of lettuce before you got the amount of carbs you’re gonna get in your wheat flour. I’m just ball parking the carbs in lettuce, I don’t really know the number — maybe it’s 5. Maybe it’s 1, maybe it’s 5. So number one, it’s the amount. Number two is the type. Wheat contains a type of sugar called amylopectin-A. And amylopectin-A raises your blood sugar higher than most other carbohydrates.

That’s what’s bad about wheat. The thing about wheat is this: if you took wheat versus table sugar, wheat will raise your blood sugar higher than table sugar will. And in that book, Wheat Belly, he goes through it in detail. But basically, the amylopectin-A is rapidly absorbed.

What do you think raises your blood sugar more, a Snickers bar or two pieces of whole wheat bread? Whole wheat bread. And that’s in that book, Wheat Belly.

Question from Audience: If you’re eating something, can you take some extra fiber … ?

That’s basically why whole wheat bread is not really much better for you than white bread. Because you add the fiber to it but it still raises your blood sugar too high.

How to Lose Weight and Still Drink Alcohol

Question from Audience: I enjoy a cocktail every now and then, what’s kind of a healthy cocktail?

Red wine would have less net carbs. Basically, gin and distilled spirits, red wine have less carbs in them than do beer, for instance. I would just tell you, Google it. If you’re gonna have whatever, look it up and see what it it has.

Question from Audience: Net carbs is what I’m looking for?

Yeah, we’ll talk about that I think that’s the next section. And you know the question can be either A, do I have to stop drinking or should I stop drinking? or B, do I just need to have low carb drinks? That’s kind of a decision for you to make on your own.

For example, William Banting — we’ll go ahead and start Hour 5 — William Banting in his letter on corpulence 1869, he details what his diet was. And in his diet he had 6 alcoholic drinks a day everyday and lost 50 pounds and kept it off for at least six years. But basically what he did was he had low carb alcohol. Now, if your diet consists of one drink a day, then perhaps you don’t have to stop drinking. But if you think, “Maybe I should stop drinking,” well if you’re on a health journey, maybe now is a good time to do it.