I’ll say another thing about fruit juice ’cause I don’t think I’ve mentioned it anywhere. Fruit juice is out, too, even if it’s 100%, all natural, super antioxidant, super health food fruit juice, it’s out because I don’t know if you’ve ever juiced an orange to make your fresh-squeezed orange juice — you have to juice five or six oranges to make one glass of fruit juice. So an orange, I don’t know the number of carbs, but let’s say an orange has 15 carbs in it, that’s just a guess. You have to do 15×5 to get the number of carbs in orange juice because you have to juice 5 oranges to get a juice. Now it’s the same for orange juice, apple juice, grape juice, any kind of fruit juice. So no matter how healthy they sell it to you as, your fruit juice is gonna be carby.

It’s a carb trap. I thought I was eating healthy low carb meal. But you see this thing right here? This is a little bitty bowl of fruit salad. That little bitty bowl of fruit salad has pineapple with raisins on it. And so my wife, she made lunch, and I was like, “Oh, this is great.” And I kind of looked at it and I thought, “Oh, I wonder how many carbs are in a pineapple,” and I looked it up. And that’s about a cup of pineapple, so that’s 20 net carbs. And the raisins, I was wondering, “How many raisins are in there?” So I took them out and I counted them – there’s 40 raisins. Each raisin has one net carb. So anyway, there’s 60 net carbs in your healthy fruit salad.

So that’s why those fruits are on the don’t-eat list or eat-very-sparingly. Because you can have a tiny little bowl like this and that means you’re gonna gain weight today, you’re gonna put your insulin up, your carb level’s gonna go higher and you’re gonna start storing fat.

How to Lose Weight by Having Good Substitutes 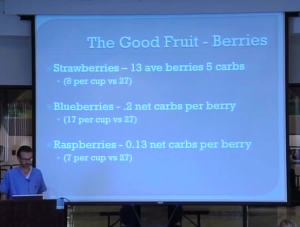 Another carb trap would be starchy vegetables, which are potatoes — whether it’s yam, white potato, sweet potato — remember sweet potato is a diabetes super food? One large baked potato has 56 carbs. And if you’re trying to stay below 60 then that means that’s all your carbs for the day. A great substitute for potatoes in any meal is turnips. We french-fry turnips, we bake turnips, we put turnips in roast and the kids eat french-fried turnips. So anything that you would use a potato for, you can use a turnip for. And why the turnip? It’s only 6 net carbs per cup versus a white potato at 30 — one-fifth of the carbs.

Cauliflower, you can use as a rice substitute. Anytime you would put rice in a meal, you can put cauliflower. You might say, “Hey, but cauliflower doesn’t taste just like rice,” and it doesn’t. You might say, “Sometimes turnips are bitter,” and sometimes they are. And I don’t know how to tell which turnip is gonna be bitter and which one isn’t. So I’m not saying they taste exactly the same but I’m saying it’s good substitute. 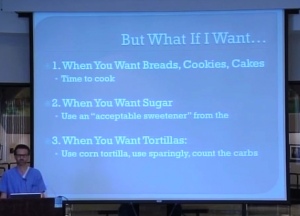 But what if you want breads and cookies and cakes? Then it’s time to cook. It’s time to cook, and what you should do is you need to use the list of approved sweeteners that are in that list and you should also use the ingredients in the list. Almond flour is great for cooking any kind of sweet bread. Garbanzo bean flour is good for cooking any kind of savory bread, something that’s not sweet. And it’s all on the list. When you want sugar, you should use an acceptable sweetener and they’re in order on that list.

The only thing I’ll — (comment from audience) — I would not use agave nectar. Agave nectar? I wouldn’t use it. I don’t know if it’s the refining process or if it’s something, but it’s just not recommended. The only sweeteners I would use would be sweeteners on the list. And I would watch out for aspartame. Aspartame’s in diet Cokes; aspartame is controversial for some people, some medical people, and aspartame, in Dr. Atkins’ book, he said he avoids aspartame because some patients who are even counting their carbs and they’re eating low carb, they can’t lose weight until they cut the aspartame. So that’s a note on that. 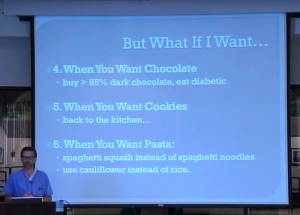