How to Lose Weight and Still Eat What You Want 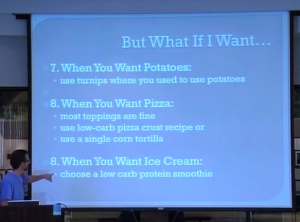 When you want potatoes, use turnips – we talked about that. When you want pizza, the toppings on the pizza usually are fine. What gets you in the pizza is the pizza crust. And the pizza crust, there are some recipes in the Wheat Belly Cookbook for lower carb pizza crust, they’re not exactly great — or you can just use one corn tortilla. One corn tortilla, and you kind of make it like a chalupa, it’s not exactly a pizza but it’s kind of like a chalupa and you just stack it on with as much toppings as you want.

Or what a lot of people do is they go to the pizza shop, or they order pizza, they scrape the toppings right off the pizza crust and feed the pizza crust to the chickens. And I don’t know if you have chickens, but I have chickens in my backyard. And the nice thing about chickens is that all that high carb bread that people put on your table at the restaurant, you feed it to the chickens and you know what they do? They turn it into protein. They lay eggs. I’m not telling you to get chickens, but anyway, it’s nice.

When you want ice cream, use a low carb protein smoothie. And the thing about protein smoothies is this: you can get a whey protein smoothie, something in it, you need to find one that tastes good, which means you’ll probably have to shop around. In the list somewhere I put the kind that I have. The kind that I get is expensive, but it tastes like ice cream. And we’ll look at that in the list, but anyway you need to find a protein smoothie that you like and when you make it, you put ice in with your protein powder and why don’t you put heavy cream? What makes ice cream good and creamy – put heavy cream. And put whipping cream in it because it’s not the fat that’s gonna hurt you. If you wanna fill out your smoothie some, then you can add some flaxseed. I add flaxseed to smoothies a lot.

Adjusting to a Low Carb Diet 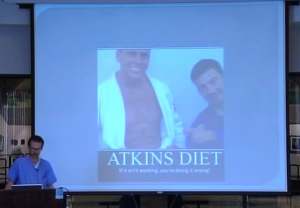 If, for the first few weeks, you are kind of feeling run down, you may take two cups of bullion each day for fatigue. Because what happens is, when your body adjusts its metabolism to running on ketones instead of running on sugar and your blood pressure goes lower, your body starts to get normal for the first time in your life, you’ll feel a little lethargic for 3 or 4 days. And you can take bullion, bullion has salt in it, and salt helps kind of keep your blood pressure up so it goes down more slowly.

Don’t fight the fat, eat it because the fat’s gonna make you feel more full. Dr. Atkins says the more fat that people eat, the more weight they lose and also the more your blood lipids, your blood cholesterol improves.

This is a guy, I saw this on his Facebook page and I just thought it was funny — Atkins Diet: If it ain’t working, you’re doing it wrong. This guy, he’s worried about his six-pack. Most people aren’t; most people are just trying to be a little healthier and lose a few pounds.

The Don’ts of Weight Loss

The Don’ts are: don’t eat sugar, fruits canned with sugar and sweets. Don’t eat wheat products. That’s all listed in the handout. And don’t eat foods containing starch: cornstarch, potato starch. The starches are the one thing that will raise your blood sugar higher than wheat flour. That’s because the starches are very concentrated and very refined. So the potato starch, cornstarch – sometimes gluten-free foods, they make gluten-free foods and so instead of using wheat they use some sort of starch, potato starch or rice starch. And those gluten-free foods, they’ll raise your sugar and they’ll raise your insulin levels higher than wheat because the starch is such a concentrated form of carbohydrate.

Don’t eat starchy vegetables – those are like potatoes – and don’t drink sweetened drinks. We talked about the fruit juice, that’s 5 times more carbs than the fruit. Avoid cereals and don’t drink beer, because beer is liquid bread, that’s what it is. Basically, they take wheat and they take all these cereal gains and they make a liquid bread out of beer. Now, is it possible to lose weight while drinking beer? Yes. William Banting did it, he did it in 1869 – actually he didn’t drink beer, but while drinking alcohol, yes. But when I began losing weight, I still drank.

Also, in the handout, if you think that you wanna quit drinking, if you don’t know if you can, you should contact your doctor. There’s an audio book called Alcohol Lied to Me, it comes with hypnosis on it. If you wanna stop smoking, it’s in your handout. There’s Allen Carr’s Easy Way to Stop Smoking. You can take the live course, the online course, or just read the book – a lot of people smoking just from reading the book.

Basically the beer belly is not harmless because that fat that people carry around in their belly, it releases a lot of hormones. And those hormones are responsible for insulin resistance and inflammation in your body. 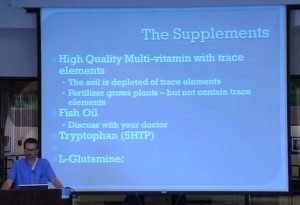 I do recommend a few supplements, one is a multivitamin with trace elements. And the reason that you take a multivitamin with trace elements is that in modern-day agriculture, they grow all the fruits and vegetables that you’re gonna be eating, that you do eat, they grow them all with fertilizer, chemical fertilizer that contains nitrogen, potassium and phosphorus – NPK: nitrogen, potassium, phosphorus – and those fertilizers make fruits and vegetables grow. And they make them grow big and they make them grow well, but they don’t contain any of the trace minerals, the trace elements that vegetables and fruits contain if you grow them in a healthy soil without the fertilizer or if you grow them in a soil that has a bunch of compost in it.