But What If I Want…

So here’s the next section, the next section is titled, “But What If I Want Bread, Sugar, Tortillas, Chocolate, Cookies, Pasta, Potatoes, Pizza, and Ice Cream?” What if you miss certain foods from your diet? When you miss certain foods from your diet that’s when you start to have to cook things, make things and think about things out of the box a little bit. So don’t deny yourself anything. But you’ll have to work a little harder if you want things like different kinds of breads or pizza or ice cream. 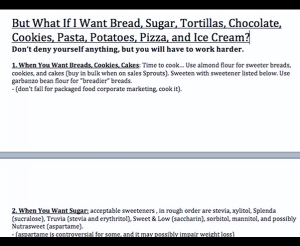 Next, number two: When You Want Sugar. When you want sugar, there are acceptable sweeteners, and they’re listed here in rough order. They are stevia, then xylitol, then Splenda (sucralose), then Truvia which is stevia and erythritol, Sweet & Low which is saccharin, sorbitol, mannitol, and possibly Nutrasweet, called aspartame. So if you want sugar, avoid the table sugar entirely and instead use one of the sweeteners on this list. Aspartame is controversial for some, and it may possibly impair weight loss.

Number three: When You Want Tortillas. When you want tortillas, use 1 or 2 small corn tortillas. Small corn tortillas are so much better for you than wheat tortillas. They don’t have the addictive exorphins in them and they’re gonna have less carbs in them. However, a corn tortilla still has about 9 carbs per tortilla so be sure and count the carbs. Note: you should avoid flour tortillas because of the wheat and the carbs. And number two, you need to avoid marketing scams, such as marketing that says, “3 carb giant heart healthy whole grain whole wheat tortilla.” Don’t fall for that. If you decide you’re gonna have to have a tortilla to wrap something in, just use one or two corn tortillas. Don’t try and avoid the carbs by falling for some sort of corporate marketing.

How to Lose Weight and Still Eat Chocolate 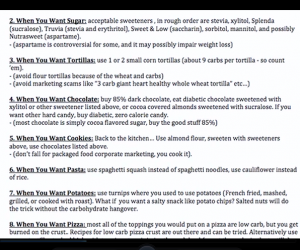 Number four: what about when you want chocolate? When you want chocolate, buy 85% or greater, dark chocolate. Or you can eat diabetic chocolate sweetened with xylitol or another sweetener listed above. Or you can try the cocoa covered almonds which are sweetened with sucralose mentioned in the Nuts and Snacks section. If you want other hard candy, you should buy diabetic, zero calorie candy. Most chocolate is simply cocoa flavored sugar. They ad a ton of sugar and just barely sprinkle in the cocoa. But you need to buy the good stuff. Buy the chocolate that’s mainly cocoa, with just a touch of sweetener added to make it taste good.

Now, number five: When You Want Cookies. So when you want cookies and when you want bread, those are the times that you should really head to the kitchen. Because cookies and bread, you can make those yourself out of almond flour with an approved sweetener with as near zero carbs. And no packaged, processed food company is gonna do that for you. So when you want cookies you gotta head back to the kitchen. Use almond flour and sweeten with sweeteners above. Use the chocolates listed above and you can make great low-carb cookies that taste wonderful. Remember, don’t fall for packaged food corporate marketing for cookies. In this case, you cook it. 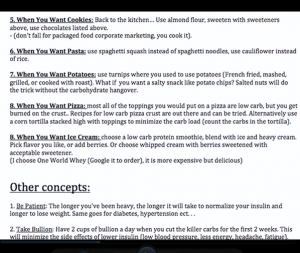 Next, number seven: When You Want Potatoes. When you want potatoes, use turnips, where you would usually use potatoes in a recipe. You can French fry turnips (I’ve done this, my kids love it), you can mash turnips, grill them, or you can even cook them with a roast just like you would regular potatoes. Now what if you want a salty snack like potato chips? In that case, use salted nuts. That will do the trick and it will do it without the carbohydrate hangover.

Number eight: When You Want Pizza. Most all of the toppings you would put on any pizza are low carb, but you get burned on the pizza crust. Recipes for low carb pizza crust are out there, and there are some in the Wheat Belly Cookbook. Alternatively use a corn tortilla – one corn tortilla – stacked really high with toppings. That minimizes the carb load and maximizes the toppings and tastes great, but you do need to count the carbs in the tortilla.

Finally, what about when you want ice cream? When you want ice cream choose a low carb protein smoothie. Blend with ice and heavy cream. Pick flavor of protein smoothie that you like, or add berries. And you can put whipped cream right on top just like you would a milk shake. And you can sweeten it with an acceptable sweetener if you need to. As I mentioned, I choose One World Whey and you can Google that; it is more expensive but it is absolutely delicious.