What about peanut butter?

Peanut butter, and the other nut butters. Basically a peanut is not a nut; a peanut is a legume. Nuts are things that grow on trees, and a peanut is a legume. So that’s why peanuts tend to be a little higher in carbs than do tree nuts. Which one is better for you than the other, I would say count the carbs, look at the carbs and peanut butter should be a little higher in carbs. The thing is, are you gonna eat all of the other nut butters, I don’t know. Peanut butter costs $2 a jar, almond butter costs $8. So you have to be pretty serious about wanting to eat a nut instead of a legume before you switch. 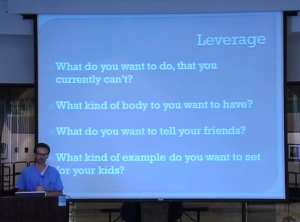 So for Hour 6 we’ll talk about leverage, industrial foods, some odds and ends and questions. Leverage is just motivation, the motivation that helps you make a change in your life. Basically, so much of what we’re motivated by is negative. Like, we might not like having to take the diabetes pills, or we might not like the way that our body looks, we might not like the fact that we can’t fit into our pants, that our pants are super tight – we might not like any of that stuff but all that’s negative. And I’ll just ask you for a second to just close your eyes with me and just think, “What kind of body would I want to have? What would it be like if I could fit into a swim suit? What would it be like if I could sit on an airplane comfortably?”

“What kind of example do I set for my kid?” That was a big thing with me. Do I want my kids to think that being tired and kind of lethargic and laying the couch all the time was normal, or did I want to set a better example for them? What is it that you want to do that you can’t currently do? What would it be like if you could go to the office and tell people that you work with or your friends at church and just tell them, “Oh yeah, I just lost 40 pounds, it was easy.” They’d say, “What?” You can open your eyes.

That’s what leverage is, it’s something positive. It’s what you’re working for, it’s what you’re working toward. And so if there’s any time that you ask yourself that question, “Do I wanna poison myself?” Just close your eyes and think for a second; think about what you want, not what you don’t want. Because you might say, “Well, I don’t want my stomach to hang over my belt,” or “I don’t want to…” whatever. “I don’t wanna have to go buy new pants that are bigger.” But that’s negative. You got to think about what you do want in your life.

How the Low Carb Diet Keeps you from Overeating 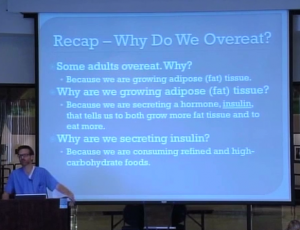 Why do we overeat? Remember, children are growing. Why do they grow? Because they’re releasing growth hormone. Why are they releasing growth hormone? Because it’s normal, a natural part of them developing. Now when we’re adults we don’t grow taller anymore. When we’re adults and we’re growing, we only grow out, that’s all we can do. So if adults overeat it’s because they are growing. And why are they growing? It’s because of the hormone, the hormone is called insulin. And why are adults releasing the hormone that makes them grow? It’s because of the carbohydrates in the diet.

And this is that quote from earlier today: “In short, carbohydrate is driving insulin, is driving fat, ” George Kayhill, Harvard University. So that’s the thing, ’cause they’d say “The Atkins Diet’s a fad.” First of all, I showed you the stuff from 200 years – low carb is a 200-year-old concept. They have known that carbohydrates are uniquely fattening. Second of all, there’s these people all over the world that know “carbohydrate is driving the insulin, is driving the fat.” And now you know it, too. Now you should have no question in your mind, and if you do have a question, ask me.

How to Lose Weight: What They Don’t Tell You 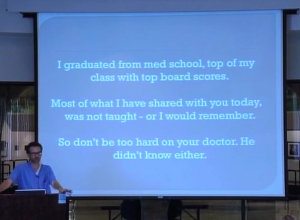 And the thing is, I graduated from medical school, I got top board scores, I was at the top of my class. I graduated in the top 5% of my medical school class. And I remember a lot of stuff from medical school. And the stuff that we talked about here today, they just didn’t teach. But don’t be too hard on your doctor because he doesn’t know, either. That’s one of the really big reasons that you need to see your doctor. Number one, if you’re on medications you’ll have to adjust them. Number two, he has to make sure it’s safe for you to eat a low carb diet because people with certain conditions can’t eat a low carb diet. And number three, you need to educate him.

And that’s what that sheet in the back of your handout – in the back of your handout is a sheet, it’s called the Metabolic Syndrome. The metabolic syndrome, this is a whole association of diseases that go together – heart disease, high blood pressure, overweight and obesity, and all of the symptoms of those diseases. Not symptoms, but markers, clinical markers of those diseases such as your weight, your waist circumference, your HDL level, your triglycerides, your homocysteine. And you should carry that paper to your doctor.