Why You Need to Tell Your Doctor

And it says, the first sentence up there, it says, “The metabolic syndrome is something; carry this paper to your doctor,” something like that. So carry that paper to your doctor and say, “Look, test me for all this stuff.” He should test you for it, because number one, you need to be convinced and you need to know 3 months later or 6 months later that what you’re doing is healthy for you. And number two, he needs to know. You will educate him.

That’s what happened to Dr. Eric Westman, the guy at Duke — I told you to watch his video. He had a patient who I think was diabetic, overweight, high blood pressure, and over the course of a few weeks or a few months he comes back and the blood pressure’s better, diabetes is better, he’s lost weight — he looks great. And so Eric Westman says, “What on earth happened?” He said, “I went on the Atkins diet.” And he said, “Nah, Atkins diet is not gonna fix all that.” And then he started to study it and he became a believer. And you can help to convince your doctor and make your doctor a believer too.

Because your doctor could help a lot of people by saying, “Look, you have two options. Your options are either: a) you go down this path of taking all these medications, boom, boom, boom, boom, or b) you cut the killer carbs.” Cut the carbs out and you can live your life without needing so much medication.

How to Lose Weight: Avoid the Poison 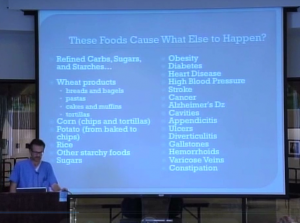 This is just to reinforce. These refined carbs, which are wheat products, breads and bagels, pastas, cakes, muffins, tortillas, corn, potato, rice, other starchy foods and sugars – these, all of these foods which are  high starch foods, high carbohydrate foods, they cause these diseases. And what do you call food that causes a disease? You call it poison. To reiterate, it’s not a poison for everybody. But if you’re struggling with these things, it’s a poison to you. And you should think of it that way.

There are all sorts of boxed foods that you can buy, and packaged foods – everything on the interior of the grocery store that’s in a box and in a package, those things are designed to make corporate profits. Their number one thing is to pack as much cheap stuff inside the box as possible to make as many dollars as possible. So really, shop outside the grocery store. Because if you buy meat and you buy cheese and you buy fruits and vegetables, you’re doing something that’s healthy for you. That money that you spend goes to you, goes to your health instead of going to make corporate profits.

Weight Loss and the Issue of Fasting 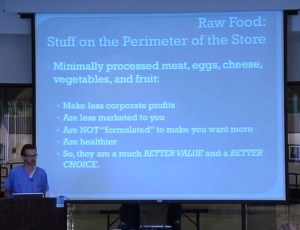 So, minimally processed meat, cheese, eggs, and vegetables and fruit, less money goes to corporate profits and more money goes to make you healthier by eating these foods. And also, another thing is that so many foods are formulated with a lot of sugar and a lot of carbohydrates and a lot of wheat to make you wanna eat more of them. Salt, wheat, carbohydrates, sugar – they put all that stuff in there for a reason – they want you to eat the whole package. And they want you to want more after you’ve eaten the whole package. Low fat diet foods, you take the fat out of foods, you don’t feel full. Fat is like an appetite suppressant in your body.

They were doing a study on weight loss and they found that if they cut the people’s diet in half and they fed them starchy foods, high carb foods, they went out of their mind with hunger. But what happens if they take people who are overweight and they put them on a complete fast, they don’t eat anything (all you have is liquids, like water)? You’re hungry for a couple of days, and then you’re not.

So there have been a lot of doctors who say fasting, periodic fasting is the way to do weight loss. Because if the only thing you have to eat at all is water, you go on a fast for a week or so, you’re not hungry. Because what makes you hungry is your blood sugar makes the carbohydrates go up and then it dips down and when it dips down, you’re hungry. And when you’re eating the wheat you go through withdrawals and you’re hungry 2 or 3 hours after your meal. The thing is, it’s not very practical for people to fast. They say, “Okay, look, you’re just not eating anything for a week or two,” they say, “are you insane?” But in the studies, people are less hungry when they fast than when they eat a low fat diet that’s high in carbohydrates. 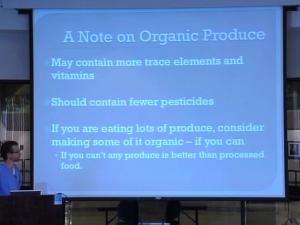 So here’s a note on organic produce. If you’re gonna be eating a ton of produce, you may consider buying organic if you’re able to, if you can. The number one reason is this: it may contain more trace elements, and the trace elements basically in conventional agriculture, they put sodium, potassium, and phosphorus on top of plants to make them grow – it doesn’t contain the trace elements. When they grow organically, they have to use things like manure and compost and those sort of things have more trace elements in them. They should contain fewer pesticides and you may decide you wanna eat a little bit fewer pesticides and get more trace elements.  You don’t have to buy organic, I’m not making a strong recommendation for organic produce, I’m saying you may consider it.

One thing I do highly recommend, though, is that you buy grass-fed beef. Because Americans have a deficiency of omega-3 fatty acids and that’s because the cows that we eat don’t eat grass, they eat corn – we talked about this earlier. Luckily where we live, there are two places that you can get grass-fed beef from. And the grass-fed beef here, you get locally from the local people listed on your sheet, they cost about the same; they’re just regular conventional beef. It may not be as cheap as what you can get a pound of conventional beef at Walmart, but it’s not terribly expensive. I recommend that because you get the omega-3s, there’s less E. coli contamination and the animals are healthier. If you eat healthier animals they’re not as inflamed to begin with and you’re not eating as many inflammatory hormones and mediators.